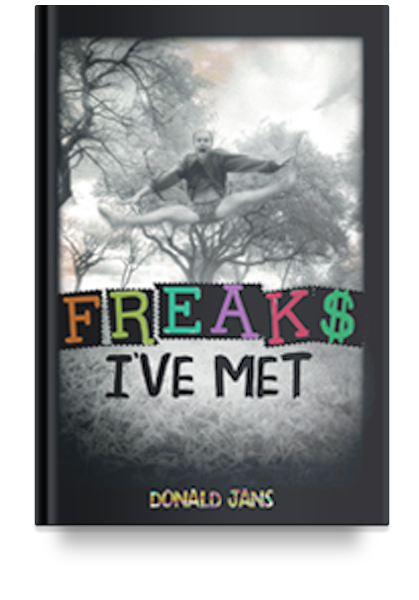 About The Book: Freaks I’ve Met

Spokane, Washington, is nearly perfect for most people, but Jack Fitzpatrick is not one of them.

At twenty-two, he’s already too bitter to stay. Hours after graduation and armed with his final paycheck from his nemesis, Mrs. Pohlkiss, Jack heads for Southern California to prove that money does buy happiness. Thanks to a lucky run-in with a talent agent a few weeks earlier, Jack has loftier (and more lucrative) dreams than minimum wage in the basement of Nordstrom’s.

But once there, he learns that lofty dreams are a dime a dozen in the City of Angels. Broke, barely scraping by, and hating his life as a temp, L.A. is definitely not what Jack expected. But that doesn’t mean he’s going to lay down and take it. After reading “Best Paying Jobs of 1987” in Newsweek magazine, he decides to go after the only one he thinks he has a shot at: institutional bond broker.

Once frustrated that his dazzling lack of experience keeps getting in the way, Jack is ecstatic to land a job at Freedom Capital, a no-name firm with a hire anybody mentality. Pumped to be on his way to his first few million, Jack eagerly engages in the challenged ethics of his new employer. When a series of innocent events lands him in prison, he’s sure things can’t get any worse.

He would be wrong.

Funny, scathing, and over-the-top, Freaks I’ve Met is an adventure so unlike any other, it must be totally true.

Freaks I’ve Met lives up to its intriguing title. The characters in this book are well imagined and artfully described, giving the reader humorous insight from the main character’s perspective. In many ways, Freaks I’ve Met reminds me of Catcher in the Rye, though the venue is not a prep school but the world of bond trading — and Jack might be just a bit more crass than Holden.
Bottom Line: This is a thoroughly enjoyable, damn-funny book! I highly recommend that you not read it at a public library, as your laughing out loud will likely annoy the librarian.

Pick Up Your Copy At Your Favorite Store